What can I do with an RC Car and Arduino ?

One of the strengths of the Arduino is the ease with which it can be interfaced with inputs (sensors) and outputs (motors, servos, LEDs, speakers etc, etc, etc)

1) G-Force Logging - use an accelerometer connected to the Arduino to measure acceleration and deceleration and log this data to an SD Card.

3) Training Mode - It would be nice to have a button to push to put a car in training mode, this would limit the power to 25 or 50% allowing me to pass the controls to my kids and then easily return the car to full power when I get the controls back

4) Traction Control - This is really a combination of 2 and 3 with a lot of extra work required. The circuit from 2 would be used to detect wheelspin and the circuit from 3 would be used to manage the power being requested from the motor. With some experimentation it should be possible to create a program to vary the motor power based on the degree of wheelspin detected and the amount of power being requested by the driver. It would also be nice to combine this with 1) to be able to log acceleration with and without traction control.

5) Traction Contol with Brake Force Control - Assuming that 4) can be made to work, the next logical step is to add active brake by using the same principle to detect a wheel locking and automatically reduce the brake force.

6) Yaw control - Yaw is movement in the left to right axis, like the fishtailing that rear wheel drive cars produce under hard acceleration. It is possible to sense this using a gyroscope and have the car automatically correct by steering into the skid.

And now a quick look at some cars 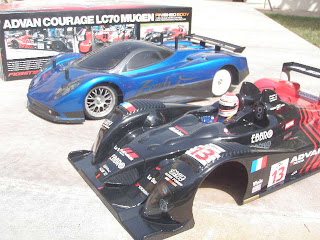 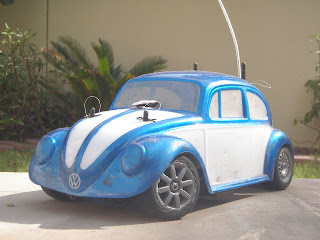 This final car is a front wheel drive car joined to a rear wheel drive car, it was an interesting project and very fast, much faster than the two donor cars. 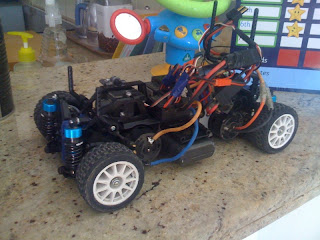 Unfortunatley as fast as this car was, the handling was too unpredictable. The rear of the car was built from a Tamiya M04 a car with notoriously bad handling. Getting this car to handle will require Active Torque Distribution at the very least.