I have finally logged some data to the SD Card. To make life super easy I am logging the data is CSV format, this is a very simple text based format that can be imported by any spreadsheet application, in my case I am using Excel. The charts are simply generated by selecting the data and clicking the Excel chart icon.

The first test - Figure of 8 and Max Acceleration, Max Braking. 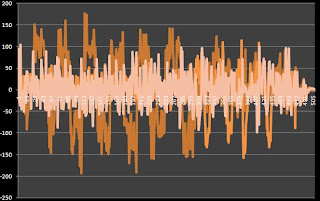 This first chart plots the X,Y,Z Axis as red, orange, pink. I would not have expected to see much movement in the Z axis as the car is running on reasonably flat tarmac however I am running smaller tyres than normal and so the car is dragging on the road where I haven't yet raised the suspension to compensate. Bumping along small stones is one possible cause for the movement in the Z Axis. For the remaining charts I have removed the Z - Axis so that we can see whats happening in the X and Y Axis (lateral G-Force and acceleration/braking). 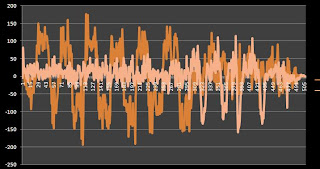 I am quite pleased with the data here. For the first half of the test I was driving in a steady figure of 8, you can see this in the graph where on the left side the pink (acceleration/braking) line is steady and the lateral G-Forces swing from positive to negative as the car corners to the left and then to the right.


For the second half of the test I changed to accelerating and braking, again this shows up clearly as the pink line now moves from the positive to the negative, accelerating to braking. Interestingly you can see that the M03 is able to brake much harder that it can accelerate - pretty much what you would expect but its nice to see it captured consistently. I can also see from the red line that at the end of my acceleration and braking runs I always turned to the right to start the next run. The final point of interest is that the test strip was on a slope, and you can see this in the acceleration and braking runs where the peak G-Force under braking is higher on the first and third runs (uphill) than on the second and fourth runs (downhill). 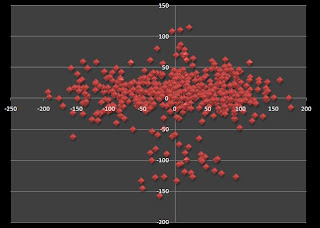 This last graph plots each data point on an X and Y Axis, with more data it should provide a reasonable representation of the traction circle.

Again you can see that I spent more time turning left and that the brake force was about 50% higher than the acceleration.

Thats the easy bit finished. Now I need to develop a test protocol to confirm the quality of the test data. I also need to run some tests comparing spinout data with controlled high speed cornering, its pretty useless data if spinouts can't be determined from successfully negotiated high speed corners.
Posted by Can_I_Trade? at 9:03 AM