So far I have used two pairs of IR Emitter, Detector diodes to monitor the speed of the front wheels, I use this information to detect wheel spin based on the assumption that if one of the wheels is spinning more than 20% faster than the other then I have lost traction in that wheel. This is all covered in the post Traction Control Part 1.1.

The next step is to interface the Arduino between the remote control receiver that receives the signal from the users radio and the electronic speed controller that delivers power to the electric motor based on the users signal.

As the first step towards this I will implement a 'Child Mode' for my cars. The idea here is that if I hold the brake for 10 Seconds, the Arduino will enter 'child mode' and map the throttle input range to a more limited 'child' range. This way whenever my son or daughter want to have a go I can discretely hold the brake to activate child mode before passing them the transmitter, a similar signal will be used to revert to standard operation. 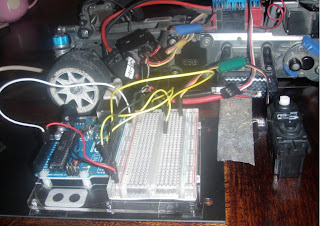 Prototype using Arduino to read input pulse width, then use the Servo library to generate output pulse of same width. The picture shows a servo connected rather than the electronic speed control but the pulse, logic and connectivity is the same for both. I prefer testing with a cheap servo rather than a racing motor spinning at 21,000 RPM !


I have had an early version of this working where the Arduino was capturing the throttle pulse width through an interrupt and then using the writeMicroseconds function of the Servo library to control the servo. This proved the concept of decoupling the servo from the receiver and giving the Arduino responsibility for mapping from the input signal to the servo.

During the testing of this code I found that I had a massive electrical noise problem when the Arduino was powered from the same LIPO battery as the rest of the car, this put the project on hold while I investigated strategies for dealing with the noise. I now have the noise under control and in the next few days hope to be able to post the 'Child Mode' code and confirm that the noise really is under control and the strategy used to control it.
Posted by Can_I_Trade? at 11:39 PM