A quick teaser of some of the projects and components that will be featured on RC Arduino in the new year. 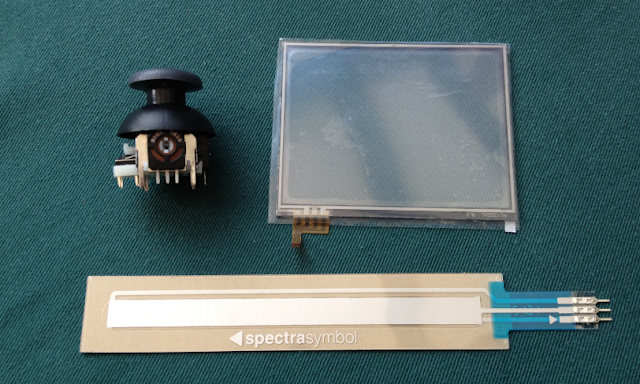 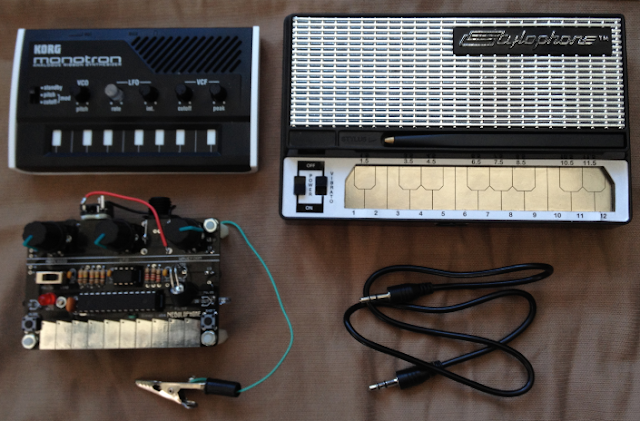 Its two RC Cars joined together to make a twin motor 4wd car with independent throttle control to the front and rear axles. The result is a small car with way too much power, its very much in the spirit of a Group B rally car or the twin motored Suzuki Escudo rally car.

This post provides a quick introduction to Direct Digital Synthesis (DDS) on the Arduino Due. The sample sketch outputs a sinewave at a 44.1Khz sample rate with 12 bit resolution using the built in Digital To Analog Converter (DAC).

A related sketch which provides more interesting audio output without the explanation can be found here -
http://rcarduino.blogspot.com/2012/11/quick-and-dirty-synth-for-arduino-due.html

Direct Digital Synthesis - Introduction
DDS is a common approach to generating sinewave output from digital systems. The approach is based around outputting samples from a description of the required waveform held in memory. The description is an array of samples which can be traversed to plot the waveform onscreen or by using DDS can generate a sinewave output at a selected frequency. 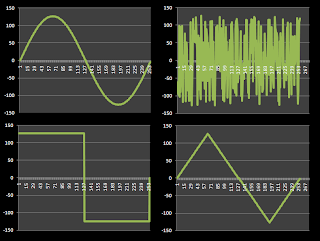 Direct Digital Synthesis - Sample Rate
To generate an output waveform we need a way to regularly update the output value, we do this by using a timer interrupt. The frequency of this interrupt is termed the sample rate, in our case we are using a 44.1Khz sample rate meaning that we have an interrupt triggering 44,100 times per second.

As this interrupt is triggering at such a high rate it is very important that we keep it efficient, this is the reason for using a pre computed wavetable rather than computing the sine samples on the fly.

Direct Digital Synthesis - Implementation and Terminology
The following terms are commonly used in reference to DDS and variations are used throughout the RC Arduino audio projects.

1) Phase Accumulator - this is an array index which points to the current sample in the selected wavetable.
2) Phase Increment - this value is used to advance the Phase Accumulator each time the interrupt is called.

// get the current sample from the sine table using the phase accumulator as the index
uint32_t ulOutput = nSineTable[ulPhaseAccumulator>>20];

Direct Digital Synthesis - Fixed Point Maths
To generate a full range of frequencies we will often need to use fractional values for our phase accumulator.


The usual method of working with fractional values is to use the float data type however in DDS we need our interrupts to run as fast as possible. With very few exceptions microcontrollers are not able to process the float data type at high speed, the solution is to use fixed point integer maths.

Fixed Points For Higher Integer Precision
There are many applications of fixed point arithmetic but in DDS the main use is to provide increased precision - equivalent to having many decimal points while still using the high speed integer (whole number) data type.

To get extra precision we use more bits than we need to represent our data range. For example the sample code below has a wave table size of 600 samples so the range of we need for our phase accumulator is 0 to 599.

We can represent this range with 10 bits but if we use 16 bits we have 6 additional bits of precession.

We use this additional precision to perform fractional addition to the phase accumulator, the 10.6 format gives 1/32 precision as the least significant bit.

This line of code is actually adding two fixed point numbers, part of the trick is that the compiler does not know this, it sees them simply as two integers which it processes using very fast hardware integer addition.

When we want to use the phase accumulator as the array index, we perform an arithmetic shift six places to the right, this drops off the six bits of additional precession and leaves us with a 10 bit integer value for the array index.

The only trick to fixed point maths is to figure out a scheme which will work for your project and stick to it. Remember the compiler does not know that you are treating part of the number as fractions so the responsibility is on you the programmer to keep consistency.

Fixed Point In The RCArduino DDS Example Sketch
The standard data type for the 32 bit Arduino Due is a 32 bit integer, this gives us scope for very high levels of precession in integer maths. The scheme used for the phase increment and phase accumulator variables in the sample sketch is 12.20 (12+20 = 32 Bits) this can be seen in the following line of code where the precision is shifted out to access the pure 12 bit integer value -

Where ever you see code that makes extensive use of '>>' operations you might be looking at fixed point arithmetic, in a follow up post we will look at how we perform fast fixed point multiplication. This is another key to fast and flexible synthesizer engines.

DDS Sinewave for Arduino Due - The Sketch
Use a potentiometer connected to analog pin 0 to control the pitch. To hear the output you can use an amplifier circuit such as this one used throughout RCArduino -

The sinewave is output through DAC0 - Note that the DAC does not provide a full 0-3.3volt swing, this is a hardware limitation of the SAM3X8E chip.


Caution : The SAM3X8E microcontroller at the heart of the Arduino Due is less able to sink and source current than the AVR family of chips used in the 8-Bit Arduinos. See the update below for the most recent recommendations -

Update 09/06/2013 - Gaétan Ro has taken things much further in the latest build of his Groovuino project. The Project uses the technique described here combined with some sensors, a sequencer and filter to produce a really nice sounding groovebox. I plan to build one of these for myself and hope to be able to help Gaétan with its further development.

Update 28/03/2013 : There is little information on the SAM3X8E DAC in the datasheet however Arduino forum used 'stimmer' has found recommendations on a closely related chip which suggest that a 2K Ohm resistor should be placed as a series current limiting resistor between the DAC Output and the load. This assumes that the load has no resistance of its own which will be the case if you accidentally short something, if you know the resistance of your load, you can reduce this value, if not, its a reasonable starting point and will protect against accidents. For more information see the original thread here - http://arduino.cc/forum/index.php/topic,139733.15.html

Update 28/03/2013 : Gaétan Ro has been building on the techniques here to produce an Arduino Due based groove box he is calling the 'Groovuino'. You can hear a clip of the project in action here -

// For helpful background information on Arduino Due Timer Configuration, refer to the following link
// thanks to Sebastian Vik
// http://arduino.cc/forum/index.php?action=post;topic=130423.15;num_replies=20

// For background information on the DDS Technique see
// http://interface.khm.de/index.php/lab/experiments/arduino-dds-sinewave-generator/

// For audio sketches making extensive use of DDS Techniques, search the RCArduino Blog
// for the tags Audio or synth

// Create a table to hold pre computed sinewave, the table has a resolution of 600 samples
#define WAVE_SAMPLES 600
// default int is 32 bit, in most cases its best to use uint32_t but for large arrays its better to use smaller
// data types if possible, here we are storing 12 bit samples in 16 bit ints
uint16_t nSineTable[WAVE_SAMPLES];

/* turn on the timer clock in the power management controller */
pmc_set_writeprotect(false);
pmc_enable_periph_clk(ID_TC4);

void TC4_Handler()
{
// We need to get the status to clear it and allow the interrupt to fire again
TC_GetStatus(TC1, 1);

// we cheated and user analogWrite to enable the dac, but here we want to be fast so
// write directly
dacc_write_conversion_data(DACC_INTERFACE, ulOutput);
}
Posted by Can_I_Trade? at 11:27 AM 76 comments: