To be updated as and when, too many cars in too many configurations to cover in one go.


M03 Rally (Sometimes its also the Magnificent M07)
M03 and sometimes M07 rally car. Its a Colt Suzuki Swift bodyshell mounted on an M03 with the usual upgrades (Sport Tuned Motor, Ball Raced, Oil Filled Shocks). Its not just the rally block tyres that make it a rally car, its also running front and rear uprights from an M05-Ra. In fact the car started life as an M05-Ra but the common parts were soon swapped over to a spare M03 Chassis. I was turned off the M05 by the fuzzy patches supplied to seal some of the chassis gaps and the incredible number of different sized screws used to keep it together.

On the road the car is good fun to drive, its never going to be at the front of the pack, in fact most of the fun is in trying to hold off the the back markers. The center of gravity on my set up is about 10mm higher than a road racing m-chassis. Fitted with some softer springs the car looks great leaning through the corners as you try to hold onto enough grip and the last of the back markers.

The chassis becomes an M07 when the front wheel drive M03 is joined to a rear wheel drive M04 to give the four wheel drive twin motored M07. The M07 is monstrously fast but needs some serious attention to drive. The M04 chassis dominates the handling causing the car to spin under braking and push wide under power in the corners. There is a great Arduino project in getting this car to deliver all of its great potential. The M07 makes M03s and FF03s look stuck in reverse off the starting line. On a long and open track like our current set up the FF03s still get the best of the small wheels and restricted gearing in the twinned up m-chassis, but coming out of the corners, this thing rules. The M07 Setup - - Two Sport Tuned Motors (20T Pinion in the front, 21T Pinion in the rear) - Two Tamiya TEU101 Speed Controllers connected through a y-lead to a single receiver - Single LIPO battery powering both Speed Controllers through a y-lead 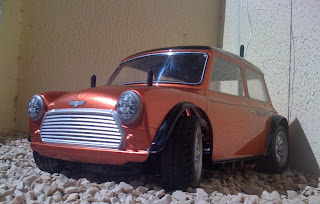 My original m-chassis a Tamiya M03 Rover Mini Cooper still with its original Rover Mini Cooper bodyshell. This car has amazing handling, very responsive but with masses of grip. Its a real joy to drive around a twisty circuit even one just thrown together from some track dots in the street. Theres nothing exotic under the shell, only the usual upgrades - oil filled shocks, fully ball raced, hardened pinion and a Tamiya Sport tuned motor. The tyres are slicks, Spice or Sweep, very sticky and very fast, but slightly smaller compared to M-Grips. The smaller tyres really suite this shell but loose out to larger tyres for top speed. On longer faster tracks I use the M03 Beetle which is essentially the same but fitted with larger M-Grips on the front and S-Grips on the rear.


M03 VW Beetle
My fastest mini, the same setup as the mini cooper, but with the slightly larger Tamiya M-Grip and S-Grip tyres for more top speed on the straight. The mini cooper would kill it on a tight track, but our current track is long, straight and open so this is my current racer.

The bodyshell is a Kamtec Beetle, Tamiya do a nicer one with chrome parts, but this shell is a tougher option for racing.

The Kamtec body shell kit includes two paint masks of the VW Badge, you can see I have used one at the front. 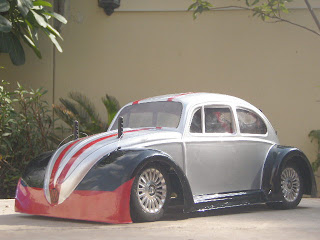 This started life as an M04 Alpha Romeo but is now wearing the hot rod version of the Kamtec Beetle bodyshell, the do several versions including a Baja.

The M04 has been ball raced and has TRF M-Chassis oil filled shocks. It has not been upgraded to sport tuned its fast enough and hard enough to drive with a standard silver can motor.

This car is crying out for traction control, its enjoyable to drive smoothly but you can't chuck it around like the front wheel drive M03s. It has a higher top speed and better acceleration than the M03s, but its nowhere near as fast around a track. It will be interesting to see if the Arduino can get this car up to M03 speeds around a track.
Sand Scorcher Re-release

The chassis is pretty much standard, the bodyshell is heavily modified but you hopefully wouldn't notice as I was aiming for a 'factory' look. Its not fast, its not the worlds best crawler but it looks amazing in action. Its a heavy car so moves very realistically on the sand.

A lot of work has gone into this car, for example the tyres are 1.9 Flat Irons cut down by hand from 115mm to 92mm and then glued back together and onto a set of Topcad rims. 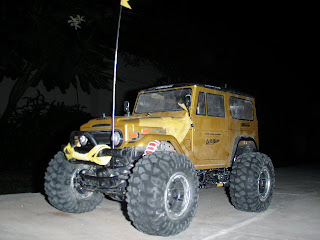 This car is an ongoing project, its converted to coilover shocks and has a two speed gearbox in it for now. Its one of my favorite runners but gets chopped and changed a lot - monster truck, scaler, crawler, dune basher.

In the long run I plan to move some of the components around to get the weight lower down in the chassis and then run it as a two speed scaler/dune basher using the two speed gearbox to switch between walking and jogging pace.