If you want to set up a track and test your skill in the parking lot or at the BMX Track you can with the RC Arduino Personal Lap Timer. There is no need to carry a laptop to the park or to set up sensor bridges, the lap timer is small enough to fit in your pocket, uses standard batteries and best of all can be built for around 30 dollars.

Its a personal lap timer meaning a single car at time, but you can have a lot of fun setting hot laps and then challenging your mates to beat them, thats the model we are currently using at our club track in Dubai. 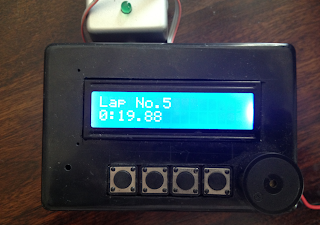 The single best feature of the lap timer is the big buzzer in the bottom right of the pciture, this gives instant feedback while you are driving, with 10 corners in 19 seconds theres not a lot of time to check the display, but a single beep for a new lap and a double beep for a new best is suprisingly effective and motivating !

If you want to time an automobile or kart ask your track whether they already have an infra red beacon, if so you can skip this step. 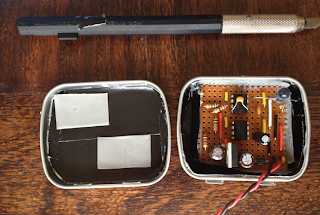 The final version of the transponder has been tested in an RC Race car running an electrically noisey brushed motor and a noisey electronic speed controller. In most of my cars the earlier versions of the transponder were perfectly reliable however I just couldn't get the earlier designs to work in this particular car, after 20 laps or so the laptimer could not longer detect the signal. The solution used in this final design is to add a voltage regulator which prevents noise crossing from the car into the transponder or equally important -from the transponder back into the car.

The Regulator
I have used a 7805 regulator, this takes the 8.4-7.2 volts supplied by the car battery as input and produces a steady 5volts as output. We use the 5 volt output to drive the timing components which actually produce the transponder signal.

You can replace the 7805 regulator with more modern alternatives, just ensure to use the supporting components recommended in your chosen regulators datasheet.

The diode is include to protect the rest of the circuit from accidental reverse power connection.

The timing circuit is based on two 555 timers, these are the basis of many introductory electronics projects so are widely available and inexpensive. 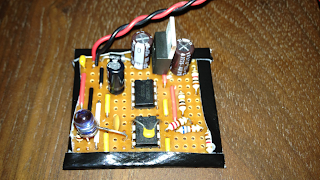 The 555 timers use a simple set of external components to set the timing behaviour and frequency. The type of circuit we want to build is called an 'astable' this is a circuit which has two states (on and off) but is not stable in either of them, the circuit continually alternates between the two states - on,off,on,off and so on.

Here is a nice introduction to the 555 Timer - http://www.kpsec.freeuk.com/555timer.htm

There are also many online calculators giving required component values for the frequencies you enter -
http://www.ohmslawcalculator.com/555_astable.php

The transponder signal is the 100Hz signal, this means that in a car travelling at 60Km/h we should receive six pulses in the time it takes the car to travel one meter, this is enough for use to reliably detect an RC Car. For full size cars the detection zone is much bigger as the tracks are wider, its actually easier to detect a faster full size can than it is a fast RC Car on a narrow track.

For a great introduction to Infra Red detectors and why the 38Khz signal from the first timer is important, see the following link and tutorials -  http://learn.adafruit.com/ir-sensor