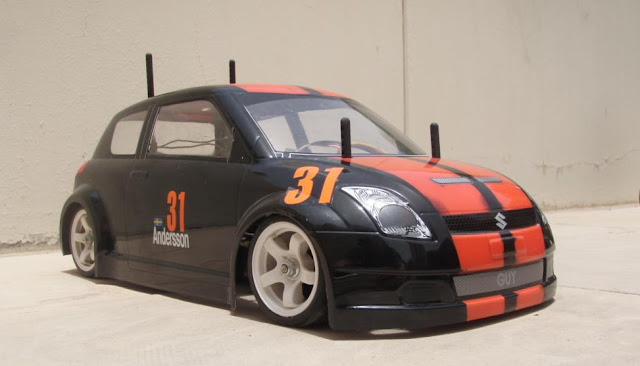 RCArduinoYawControl by DuaneB is licensed under a Creative Commons Attribution-NonCommercial-ShareAlike 3.0 Unported License.
Based on a work at rcarduino.blogspot.com.

Do you have an RC Car thats just too unpredictable to really enjoy ?
Are you a beginner driver in the rear wheel drive classes and could use some help ?
Do you race in a class where electronic assistance is allowed ?

Existing solutions are not helping you as they fail to address the root cause of RC Car instability.

Race orientated RC Cars are powerful enough to reach scale speeds of 600 miles per hour. Stability solutions currently available try to address this excess power by actively steering into skids however this approach cannot hope to match up to the vast amounts of power resulting in frustration, broken cars and lost interest.

The RCArduino solution is the first complete solution to RC Car yaw control and provides the perfect introduction to driving the fastest and most challenging RC Race cars -
- Learn to drive high powered RC Cars using the RCArduino adjustable assistance system.
- Bring the fun back into high powered RC
- Reduce the sensitivity as your skill level increases.
- Avoid unecessary crashes and breakage while learning

In Yaw Control Part 1 I discussed how gyroscopes can be applied in Radio Controlled cars to reduce yaw under braking and acceleration.

Since this first post I have developed an Arduino based yaw control system which goes beyond the original goals to address the major flaw in the gyro based approach.

Background - Why do we need Yaw Control ? 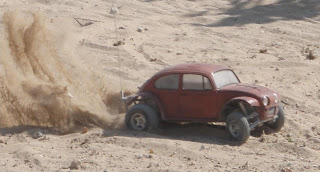 Radio controlled cars have many times the power to weight ratio of conventional cars. In front wheel drive and four wheel drive RC Cars this can be seen in the form of wheel spin and power slides. Few of the rear wheel drive RC Car designs are able to cope with this excess power resulting in a car that spins out under acceleration. All of my RWD Cars - Tamiya M04, F103GT, 3Racing F109 and Sand Scorcher will spin out under modest acceleration.

A similar problem exists with braking, in a RWD RC Car, the motor provides braking, but as the motor is only attached to the rear wheels the effect is similar to pulling the handbrake (e-brake) in a road car. Great for j-turns, but its not going to get you around the track very quickly.

The original and flawed concept

My original design was based on an established idea which is to use a RC Helicopter gyroscope to counter steer into a skid before it can develop into a spin. These gyroscopes are readily available and are used in RC Helicopters to automatically increase or decrease the tail rotor speed to compensate for changes in the main rotor speed which would otherwise cause the helicopter to rotate. This type of gyro is known as a rate gyro. 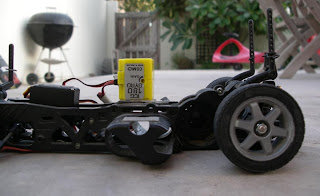 To use a rate gyro in a car, the gyro is connected between the receiver and the steering servo. The gyro listens to the incoming steering signal and generates an output based on this and the rate of rotation. When the model is accelerating or braking with no steering input, the gyro will detect the car starting to rotate and automatically signal the steering servo to steer into the skid and bring it under control.

'Radio controlled cars have many times the power to weight ratio of conventional cars.'

It is fundamentally a power problem. Attempting to address the problem through steering alone will only get us so far.

So what is the solution ?

The solution is to take active control of both steering and throttle channels,  this way we can address the original cause of the problem (reduce the excess power) and the resulting effect (steer into the slide before it becomes a spin).

Unfortunately RC Gyros are primarily designed for use in helicopters and so while we can use them to add active counter steer to our cars, they are not able to interface with the throttle channel and are therefore unable to address the root cause of our problem.

Fortunately there is a interesting micro controller project to build this dual channel active control system.


Note : For a background on the techniques used to read the RC Receiver, Output the RC Signal and Calibrate with the RC Transmitter refer to the previous RCArduino posts listed below -

The RCArduino approach to yaw control implements tuneable control of both the throttle and steering channels. Separate adjustments are provided for each channel ranging from no intervention to very aggressive intervention. 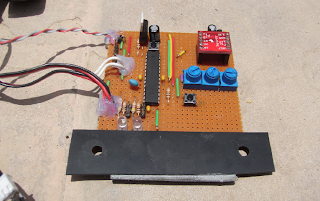 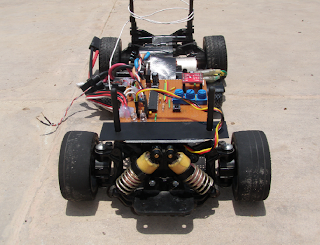 How does it work ?

The unit reads the incoming signals and generates corresponding output signals. When the unit detects the car rotating it will calculate an intervention component for the output to reduce the rotation and allow the driver to retain control. The degree of intervention is adjustable from no intervention to very aggressive.

The intervention recovery period provides for a tuneable degree of drift. With a long recovery period the car will be very stable through the corner and onto the straight. With a minimal recovery period the throttle channel will be continually 'blipped' throughout the corner and a moderate drift can be maintained. With low recovery periods, transistions can be very aggressive, as soon as the system detects that rotation has stopped it will apply full power, this can happen in the transistion of an S bend or when exiting a corner onto the straight. This is a useful tuning technique for learning where a car can be driven hard and which points on the circuit require a more restrained approach.

The system has been road tested on various surfaces and tyre combinations for around 10 hours without any unpredictable behaviour, the next step is to change the motor from the current entry level silver can motor (<>15,000 RPM) to a Sport Tuned Motor (<>22,000 RPM).

Version 0.1 Code - Lots of obvious optimization needed and lacking features being tested in 1.0, but in the interest of sharing, here it is -