RCArduino has been visited 40,000 times since I bought my first Arduino and started the blog in January of this year.

So whats coming in the future ?

In no particular order-

1) An update to the serial servo library that gives the option of an additional ten servos so that now we can have 20 servos using only four pins and two 30 cent chips.
Twice the power of this - http://rcarduino.blogspot.com/2012/08/arduino-serial-servos.html Ten servos on two pins - 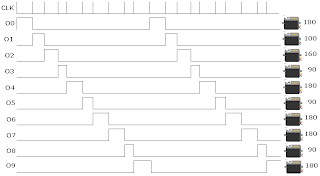 2) A new servo library that does not require external components but includes some novel features which will be useful in a range of applications - its currently on the desk next to me generating a servo signal from almost every single pin of my Arduino - thats right 18 Servos one from every nonessential digital pin and one from every single analog pin - thats not one of its advantages, just part of the testing process before I release it.

3)  More on the RCArduino Lap Timer build along. We have run two rounds of a lap record contest using the system at the Pro RC Track in Dubai. One of the questions everyone asks is can they have their own personal timer to take home and can they be paired with two different cars so that you can run against each other using individual boxes. This is something I am working to address, so stay tuned.

Some laps from the first contest run using the RCArduino Lap Timer - one in a box, one on breadboard both running the code published on this blog.

4) I have made a breakthrough in the design of a fast lightweight library for reading RC Receivers, in the meantime there are two optimizations I will release for the previous approach provided here - http://rcarduino.blogspot.com/2012/04/how-to-read-multiple-rc-channels-draft.html - Look out for an update.

Finally if you have used the code or techniques from the RCArduino blog to build something interesting, let me know and I will post it.