Reading From An RC Reveiver - Do you need a new Radio ?

In the original series of posts relating to reading an RC Receiver with a microcontroller I included a number of charts showing how the RC signal quality degraded under realworld conditions. To summarise - as the distance between the transmitter and receiver increased, or the complexity of the built up environment increased, the variance (aka 'chatter') in the signal increased to the extent that a steering servo can be seen to rapidly chatter back and forth. This can happen at distances as little as ten meters so imagine the effect at the furthest point of the race track.


Steering Channel Of A 27Mhz AM Receiver At 10 meters Distance In A Domestic Environment.

I don't recall ever having seen this simple test described online or in print, so next time you are out with your RC Equipment, place the transmitter on the ground and walk away with the car in your hands. If you are using a 27Mhz system like me you will find your steering servo begins to chatter. As you keep walking, the chatter will get worse and worse, you may even find that your ESC begins to start and stop erratically. In my case testing in a street lined with steel reinforced concrete villas, the chatter was severe at only 20 meters.

In the original series of posts, I suggested that I would expect a more stable signal from more modern equipment and invited readers to repeat my tests so that I could publish the results. A reader ( Erni ) replied through the Arduino forum with results from a modern 2.4Ghz system that showed complete stability under similar test conditions.

While I did not rush out and buy a new transmitter, the opening of a new RC Race track in Dubai got me thinking about the probable effect of servo chatter on lap times. A few days later I saw a Spectrum DX3S 2.4Ghz system at a good price in a local hobby shop (thank you Extreme Hobbies) and now I have one.

The transmitter comes with two receivers and the following telemetry sensors - The RPM sensor is a very compact surface mount Infra Red Emitter/Detector which would be an improvement on the wheel speed sensors I am currently using for the traction control project. 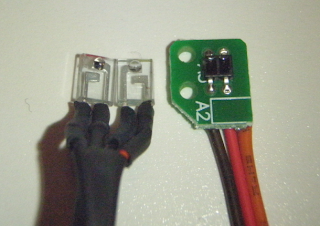 As for the signal quality, a quick test around the house showed complete stability. The older 27Mhz system offered particularly bad performance in the same domestic environment (television, dishwasher, fluorescent lights, all switched on). A follow up test with the car carried as far from the transmitter as I could reasonably see and control it, again showed complete stability with no chatter or glitching from either the steering or the ESC.

Aside from the superior signal performance, another feature of the radio I am interested in is the Auxiliary channel. This could be used to switch program modes on the micro controller running in the car, however I already have a nice solution for this using the 'dead zones' within the existing channels. Where I see the auxiliary channel being useful is for applying settings remotely and without the need to include mechanical potentiometers on the in car circuitry.

As an example, to set the throttle range in child mode, put the car into child mode using the 'extra channels on the cheap' approach - http://rcarduino.blogspot.com/2012/01/how-to-read-rc-receiver-with_25.html - then activate the auxiliary channel, move the throttle to the desired maximum and minimum, then deactivate the aux channel to store and use this new range. Its simple, can be done remotely and does not require any additional components.

The same approach could be used to program traction control sensitivity or any other parameters that need to be tuned in car.

I always swore off buying a new radio on the basis that 'How can a radio possibly make you a better driver' however now that I have seen and measured the difference I am quite certain that a more stable receiver signal through the furthest corners of the track can only help traction and lap times.

Do you need a new radio ? Try the walk away test with your own equipment and find out.